We cannot stress enough the importance of HILLING UP your vines for protection from both Drying Out and Cold Temperatures!​

Ask yourself these questions

Is my vineyard in the North East?

Is my vineyard in the Central East?

Is my vineyard either in the PURPE or GREEN locations on the Zone map to the right?------->

Does the average temperature in my area get below 30F ?

Do winters in my area experience extreme temperature changes in a short period of time?

Do we get late frost warnings?

Is the soil dry?

Are my vines under four years old?

Have I seen winter injury in my vineyard in the past?

Give Eric a call, or email him to discuss the importance of Hilling Up in your area?

**If you are questioning whether or not you should Hill UP your vines, 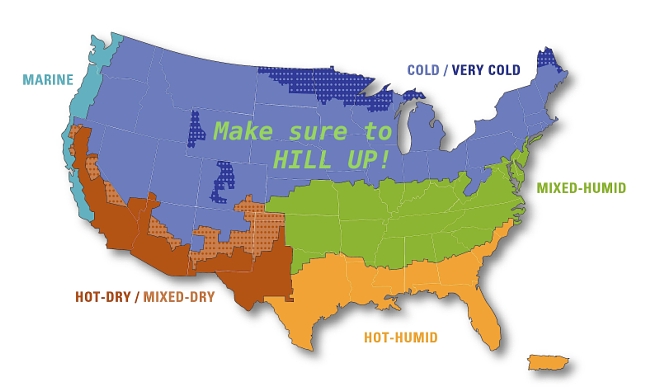 Hilling-up, is one of the most effective methods of protecting the graft union and preventing winter damage. Soil hilled-up around the vine acts both as a thermal mass that holds heat, and as an insulator that slows heat loss during extreme cold temperature events.

Growers can use the soil available near the trunk base to guard against winter injury.  Covering 3 to 4 inches above the graft union facilitates temperatures close to subsoil numbers around the union.

Thus, temperatures around a hilled up vine can read 32°F  at the graft union, while the air temperature a few inches above the soil mound was around 10°F. 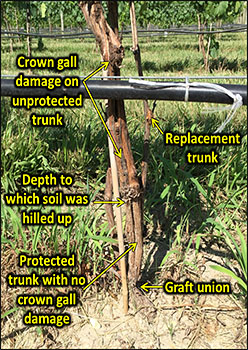 Grape vine in year after hilling and damaging winter. Notice graft union and trunk a few inches above it unaffected by winter damage due to hilling-up, while unprotected trunk is showing symptoms of crown gall.

Hilling-up can be done manually or mechanically. Tools specific for hilling-up are available, however, existing farm machinery can also be adapted for this purpose (e.g., vegetable tiller, single plow, disc harrow, etc.). For hilling-up, a hoe can be front-mounted, tailed, or side-mounted. One-sided hoes are easier to operate with higher accuracy compared to two-sided, which require very straight rows. The potential for damage to vines is higher with a less skilled tractor operator.

The goal for the hilling-up is to create a soil mound of 3–4 inches above the graft union. Depending on the soil type, levelness near the base, and soil moisture during hilling-up, two or more passes may be required to effectively cover the majority of the graft. Vines with uncovered graft unions after the second pass may not have been planted at the right depth. 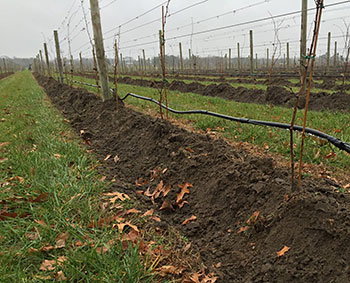